A splendidly bound copy of the most sumptuously produced French work on butterflies. It was issued in an edition of 250 copies only, and the subscribers were the French King, members of the Royal Family, the King of Spain and Sweden as well as a great number of notabilities and scientists such as the Duc d'Aumont and le Compte de Buffon. The text is by Engramelle (1727-1781) an Augustinian friar, musician and naturalist. Ernst is mentionned as illustrator, however, from 1785, it was Maria Eleon Hochecker who prepared most of the plates. The 3 plain plates show instruments for catching and mounting butterflies. The charming frontispieces and plates are superbly hand-coloured and belong to the very best made in the field of entomological illustration. "The 'Papillons d'Europe', one of the most ambitious entomological publications of the eighteenth century began to appear in Paris 1779. Included in the impressive list of subscribers were the King and other members of the French Royal Family. Ten years later, as the French Revolution gathered momentum, instalments of the 'Papillons d'Europe' continued to appear. Even when the Terror was reducing the ranks of the people who might buy expensive publications about natural history, further instalments appeared for sale in the Paris bookshops. Publication ended in 1793, after more than 350 plates had been issued. How a publisher could have continued to publish such a book throughout these terrible years is something of a mystery. It is known that a stock of some of the plates was not distributed, presumably because some of the subscribers had lost interest in the publication after a visit to the guillotine. The high quality of the plates of the hand coloured engravings is well seen? "(S.D. Dance & E.G. Hancock. Butterflies, moths and other insects p. 52). Occasional light browning to text, the plates being printed on thicker paper are not affected and in very fine condition. Nissen, ZBI 1300; Horn-Schenkling 6051. 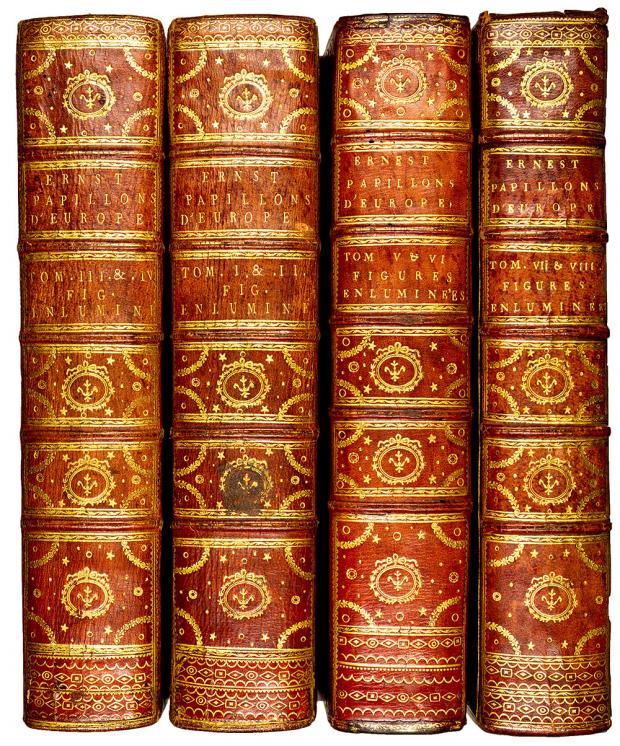