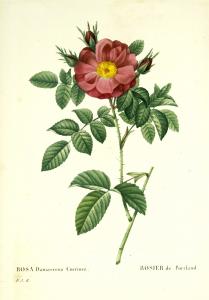 Eur 15,000 / USD 17,300
The price shown on each item does not include V.A.T (Value Added Tax). As a result of the recent EU legislation we are required to charge our EU customers the percentage of V.A.T. charged by the customer’s country of residence, unless they possess a V.A.T. registration number. Postage Additional.

A fine copy of the rare first 8vo-edition of the most famous book on roses. It was first published in folio from 1817 to 1824 with 169 plates, and was followed by 3 octavo editions. Pierre Joseph Redouté is one of the most famous flower painters of the Western civilisation. Through him the long tradition of botanical book illustration reaches under the patronage of Empress Josephine, wife of Napoleon I, its climax. His best known work is 'les Roses'.
"Redouté started painting his 'Roses' at Malmaison. Joséphine, whose full name, as we know, was Marie-Joséphe-Rose, had an ardent interest in these flowers, and around 1810 she was growing several hundred of varieties in her gardens, a collection unique for its time. The 'Roses' is still another, and this time posthumous, tribute to Joséphine's contributions to the arts of horticulture and botanical illustration. She did not live to see the book produced, but in many respects the plates are still Joséphine's roses" (A catalogue of Redoutéana pp. 25-26). 'Les figures, réduites et gravées de nouveau par les plus habiles artistes, seront toutes également bien coloriées sous les yeux de M. Redouté? Cette nouvelle édition, aussi soignée que la première?' (Introduction p. 4).