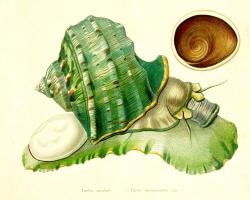 Eur 22,000 / USD 23,100
The price shown on each item does not include V.A.T (Value Added Tax). As a result of the recent EU legislation we are required to charge our EU customers the percentage of V.A.T. charged by the customer’s country of residence, unless they possess a V.A.T. registration number. Postage Additional.

one of the most beautiful shell books ever made

A fine copy of one of the most beautiful shell books ever made, illustrated with handcoloured engravings. The set belonged to the famous Spanish conchologist J. Hidalgo, with some pencil annotations in the text and separate inserted handwritten lists in some of the volumes. Kiener made use of the famous Delessert collection and that of the Natural History Museum of Paris, together the largest and most varied fund of conchological material on the continent. "He soon put it to good use; and in 1834 he published the first part of his 'Spécies ...' This exquisitely illustrated iconography, started before the Sowerbys and Reeve began to issue theirs, appeared at intervals up to 1879, when eleven volumes had been completed. All devoted to the illustration of marine gastropods with the exception of the tenth volume, which includes a monograph on the bivalve genus Thracia. The eleventh volume is the work of Paul Fischer. All the illustrations are by celebrated French engravers and artists of the day." (Dance. Hist. of Shell Collecting p. 137). This beautifully illustrated iconography on shells is still a valuable work of reference because of the new species described in it. The work is complete with 902 handcoloured plates as indicated in the last volume, where the publisher 'Ballière' informs the reader that the work consists of 165 parts with a total of 902 plates. Nissen, however, calls for a 20bis plate in the Cypraea section which, indeed, some copies have. Most likely only the early issues have this 'bis' plate, which was probably replaced by a corrected plate 20 in later issues. In the text this 'bis' plate is not mentionned. The plates of the present set are very fine and clean, however, there is foxing to the text.