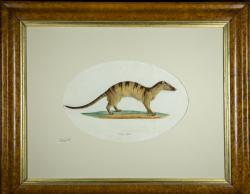 The annotation '1/2' in the title refers to scale, ie. the painting is half the size of the actual animal. There is no signature nor other inscription at the front of the painting, nor is the paper watermarked or dated. The reverse of the painting has a handwritten pencil notation 'Exhibited Autumn 1963'.
This image was first reproduced as a coloured lithograph in C.J.Temminck's 'Verhandelingen over de Natuurlijke Geschiedenis der Nederlandsche Overzeesche Bezittingen', published in several parts in Leiden between 1839 and 1847, and considered one of the finest of the 19th century illustrated books on Indonesia. The Palm Civet plate was published in the Zoology volume on 11 October 1841, as plate 18 of part 5 (General Part 13), and the plate was inscribed in the margin below the image as follows: Dr. A.S. Mulder in lap. del (lower left); Viverra Boiei, Arnz et Comp. Amst. color (lower centre); J.M. Kierdorff, impr. (lower right).

Coenraad Jacob Temminck (1778-1858), the son of the Treasurer of the Dutch East India Company, was a zoologist and the first director of the National Natural History Museum at Leiden from 1820 to 1858. It was largely due to his initiative that in 1820 the Natural Sciences Commission of the Netherlands Indies began sending scientists to the Dutch East Indies to collect natural history specimens.
The animal (an old male) depicted here had been collected somewhat earlier in southeast Borneo by Henri Albert von Henrici (1783-1838), a Dutch military man and draughtsman, who came to Indonesia in 1827 and worked in Borneo from 1830 till 1836. The animal was sent alive to Artis Zoo in Amsterdam, and was donated to the Leiden Museum after its death. It is still there, initially identified and named as 'Viverra boiei Müller',1836, since re-classified as genus 'Hemigalus derbyanus' (Gray, 1837), subspecies 'Hemigalus derbyanus boiei' (Müller, 1838).
'Müller' refers to Dr Salomon Müller (1804-1863), a German draughtsman, scientist and author, who came to Indonesia in 1826, where he was appointed to the Natural Sciences Commission as a taxidermist. He travelled in New Guinea, Timor, Java, West Sumatra and, in 1836, in Borneo, whereafter he returned to Holland (Leiden) in 1838, where he worked up the materials for several books and also wrote the Zoology volume of C.J. Temminck's publication in cooperation with the Dutch zoologist, author and draughtsman Hermann Schlegel (1804-1884). Following the dissolution of the Natural Sciences Commission Müller returned to Germany in 1850 and settled permanently in Freiburg.
The original drawing for the Palm Civet plate is not in any public collection, and its whereabouts are unknown. The plate itself was lithographed by A.S. Mulder, and the fact that the inscription in the margin of the plate reads 'Dr. A.S. Mulder in Lap. del' points towards the likelihood that Mulder also made the original drawing, as 'del' (an abbreviation of the Latin word 'delineavit' meaning 'he or she drew it') usually follows the name of the artist from whose original drawing the plate was engraved or etched.
A.S. Mulder, or 'Dr.Aeschinus Saagmans Mulder' (1804-1841) was a Dutch scientist, draughtsman and graphic artist, who never visited Indonesia but who (according to Haks & Maris, Lexicon of foreign artists who visualized Indonesia) "?made several drawings of Indonesian natural history interest, which were lithographed and used to illustrate the Zoology and Botany volumes of C.J.Temminck's 'Verhandelingen etc'?". It is therefore likely that he made the original drawing from the specimen collected by Henri Albert von Henrici, sometime between 1836 and 1841.
As this watercolour is dated 1849 it is assumed to be a - quite accurate - copy of the plate in Temminck's 'Verhandelingen', most likely by Salomon Müller himself, who was a very good draughtsman. At the time photography was still in its early/experimental stage, and drawing by hand was the only way images from books or magazines could be reproduced.
There are some very minor differences in the details, but the measurements of the animal in the watercolour and the bookplate are identical, viz. overall length from nose to tail is 35.3 cm , ½ actual size. Also the measurements of the paper sheet of the watercolour and the bookplate are virtually identical, viz. 30.0 x 46.0 cm and 28.3 x 43.7 cm respectively.
Further points supporting the attribution of the watercolour to Salomon Müller are that - as Henri Albert von Henrici and Aeschinus Saagmans Mulder had passed away in 1838 and 1841 respectively - only Hermann Schlegel and Salomon Müller (both born in Germany in 1804) were still alive in 1849, and the fact that the date is written in German. Also, as previously mentioned, Müller was still working in Leiden in 1849, and periodically visited his family in Freiburg during his stay in Leiden from 1838 to 1850.