A beautiful large uncut copy, given by the author to his wife with the following dedication: "A Madame la Princesse Zénaide Bonaparte, modèle des épouses et des mères. L'Autheur après vingt ans de mariage". The author Charles Lucien Bonaparte was the son of Napoleon's brother Lucien, and Zénaide was the daughter of Napoleon's older brother Joseph. Soon after his marriage Bonaparte went to the United States, where he started a brilliant career as a naturalist and published his 'American ornithology' (Philadelphia 1825-1833). At the age of 25 he returned to Europe and despite his family connections and the disruptions that followed the Napoleonic era, he became a competent and highly respected naturalist. A monumental work on the vertebrate fauna of Italy, published in 30 parts. The splendid plates were lithographed by Battistelli, most of them from drawings by Carolus Ruspi and Petrus Quattochi. "Now he intended to increase the knowledge of all branches of the vertebrates by his researches and theoretical works; with his 'Iconografia della fauna Italica', begun in 1832 and completed in 1841, he added to the understanding of Italian mammals, reptiles, amphibia, and fishes, as well as birds' (Stresemann. Ornithology p. 158). "With his extensive private collection and library housed at his estate in Rome, he began work on his vertebrate zoology of Italy ... Volume two, the 'Amfibi', covers herpetology and contains 54 beautiful handcoloured plates, in folio size. It was the standard on the Italian herpetofauna until superseded by Lorenzo Camerano's monographs" (Adler p. 29). The third and largest volume concerns fishes and contains 78 large splendidly hand-coloured plates. These plates represent a unique portrayal of Italian and Mediterranean fishes and have never been surpassed in beauty of execution. Some of the plates have a silver metallic sheen. Nissen, 'Schöne Fischbücher', 26; Nissen ZBI, 459; Wood p. 248; Anker 48. See also P.T. Stroud, 'The Emperor of Nature Charles-Lucien Bonaparte and His World'. 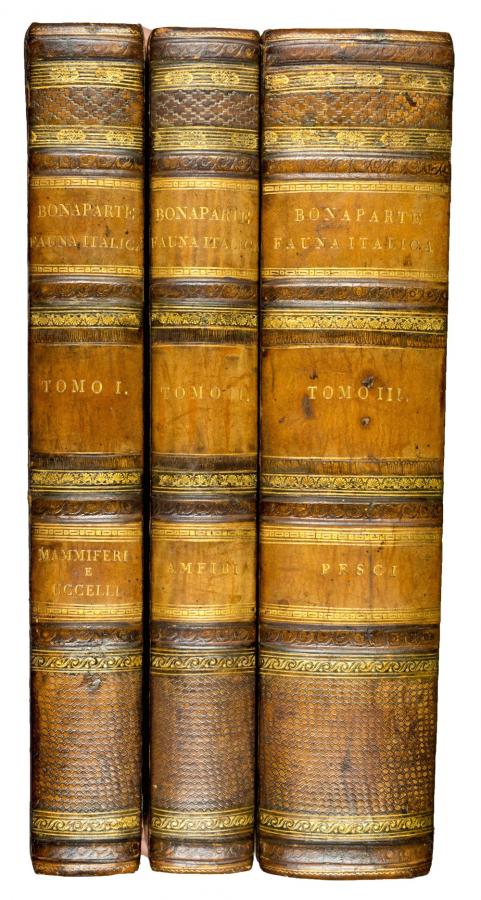