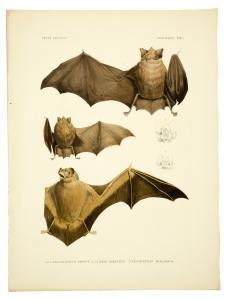 The mammalia section of this famous work on the fauna of Japan. Siebold was the first western scientist to fully explore the fauna of Japan. The first work was published in 4 parts, the last part pp. 41-59 is lacking in many copies as it was published later. The famous Japanese wolf is shown on plate 9. Philipp Franz von Siebold (1796-1866) was the most important European scientist who almost single-handedly put Japanese studies on the European academic map. In 1823 he was posted to Japan as a surgeon to the Dutch factory on Deshima. He played a significant role in introducing Japan to the West and in his introduction of Western science to Japan.