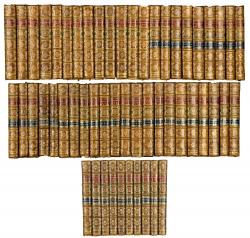 A beautiful uniformly bound, uncut and complete copy of the 'Deux-Ponts Edition' of Buffon's work. The work was published in 54 volumes comprising 4 sections. The first 13 volumes deal with 'Histoire naturelle', followed by 18 volumes 'Oiseaux', 14 volumes ' Quadrupèdes' and 9 volumes 'Minéraux'. The present edition is the last one published during Buffon's lifetime and is considered one of the most charming and attractive editions of his works. Copies in such mint condition are rare. The plain plates were never coloured.