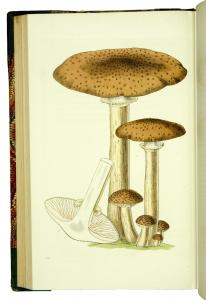 Scottish Cryptogamic Flora, or coloured figures and descriptions of cryptogamic plants, belonging chiefly to the order Fungi; and intended to serve as a continuation of English botany.

Eur 3,200 / USD 3,400
The price shown on each item does not include V.A.T (Value Added Tax). As a result of the recent EU legislation we are required to charge our EU customers the percentage of V.A.T. charged by the customer’s country of residence, unless they possess a V.A.T. registration number. Postage Additional.

A fine set of this beautifully illustrated work on Scottish fungi which was published in 72 monthly parts with 5 plates each and was intended as a continuation of Sowerby's 'English Botany'. "Das Werk gehört zu den für die Pilzsystematik bedeutenden colorierten Tafelwerke" (Dörfelt & Herklau, Die Geschichte der Mykologie p. 350). Robert Kaye Greville (1794-1866) was a Scottish mycologist and made important contributions to Scottish mycology. "Greville beautifully illustrated this work, and the treatment is also of high quality. New species were described, and a number of new combinations proposed...' (Margadant p. 131).

Provenance: Armorial bookplate of John Dunkin (1782-1846) who was an English topographer.