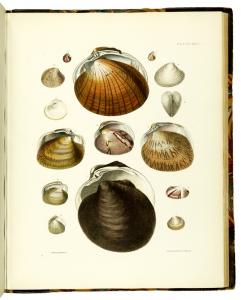 Illustrations of the recent Conchology of Great Britain and Ireland, with the description and localities of all the species, marine, land, and fresh-water.

Eur 1,500 / USD 1,600
The price shown on each item does not include V.A.T (Value Added Tax). As a result of the recent EU legislation we are required to charge our EU customers the percentage of V.A.T. charged by the customer’s country of residence, unless they possess a V.A.T. registration number. Postage Additional.

Every shell, as far as possible, has been drawn from Nature, and generally from the largest and most beautiful specimens

Thomas Brown (1785-1862) was a British naturalist and malacologist. At the age of 21 he joined the Forfar and Kincardine Militia, raising to the rank of captain in 1811. From that time onward he was universally known as Captain Thomas Brown. In 1838 he became curator of the Manchester Natural History Society's Museum. He wrote a number of natural history books which were illustrated and coloured by himself. This edition contains 9 plates more than the first, published in 1827. From the preface: "Every shell, as far as possible, has been drawn from Nature, and generally from the largest and most beautiful specimens which the author could meet with". 'In some copies the plate numbers have been altered in ink' (Dance. Shells p. 58). This is also the case in the present copy. The colouring of the plates is excellent.