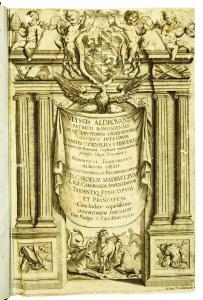 Included among the illustrations are cuts of a unicorn horn

Second Bologna edition of this work on quadrupeds, which was published posthumously as many of his other works. The volume is devoted to 'solid-hooved' quadrupeds, such as horses, zebras, elephants, centaurs, etc. and features several fine woodcuts, many from drawings by Jacopo Ligozzi. Included among the illustrations are cuts of a unicorn horn and a remarkable one of petrified elephant's catarrh. "Although Aldrovandi is not identified with any revolutionary discoveries, his work as a teacher and as the author of volumes that constitute an irreplacable cultural patrimony earns him a place among the fathers of modern science. Perhaps most importantly he was among the first to attempt to free the natural sciences from the stifling influence of the authority of textbooks, for which he substituted, as far as possible, direct study and observation of the animal, vegetable, and mineral worlds" (D.S.B. I, pp. 108-110). Some old paper repair on verso of title and some browning as is usual with this work.