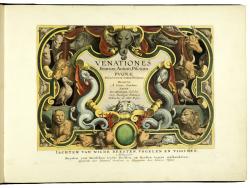 Eur 16,000 / USD 16,600
The price shown on each item does not include V.A.T (Value Added Tax). As a result of the recent EU legislation we are required to charge our EU customers the percentage of V.A.T. charged by the customer’s country of residence, unless they possess a V.A.T. registration number. Postage Additional.

This late issue of which only a small number were made is probably the most beautifully coloured issue of one of the most attractive huntingbooks ever published. The first edition was published 1578 by P. Galle in Antwerp. "Stradanus, or as he was originally named Jan van der Straat (1523-1605), was born in Bruges, but did most of his work in Italy. He was principally a designer of cartoons for tapestries, and there are very few of his pictures in existence. From 1553-1571 he was employed by the Duke Cosimo de' Medici in Florence, who commissioned him to make a number of designs for tapestries, representing fowling, fishing and hunting scenes, for the adornment of twenty rooms in the Palace of Reggio-a-Cajano. The present set of 'Venationes' was engraved from these beautiful and original compositions" (Schwerdt II, p. 228). The fine plates were engraved by I. Collaert, Cornelius Galle and others. "After pl. 102 is included 'Vermis Sericus', a series including an engraved frontispiece containing 4 vignettes illustrating the development of the silkworm from the month of May to August, and 5 other plates"(Schwerdt). The colouring of this copy is outstanding. On the verso of a few plates small paper restoration at the lower margin. A fine copy.