First edition, mixed first and second issue, with the rare 'Auctuarium' at the end of the last volume. A rare complete copy of the first great survey of the flora of the East-Indies. "Few important scientific works have come to print under greater difficulties" (Hunt). "The flora of Amboina is typically Malayan, although a few Australian types are present as in other parts of the Malayan region. Practically all the species found along the seacoast are of general distribution from India to Malaya and Polynesia ..."(Merrill). In 1652 Rumphius enlisted with the Dutch East Indies Company and took up residence in Amboina in 1653. His sight was failing and by 1670, when his great work was ready for publication, he had become blind. His bad fortunes continued when in 1674 his wife was killed in an earthquake, and in 1687 a fire destroyed his library including his original drawings. These were drawn anew by his son Paul, and in 1692 the manuscript of the first six volumes was sent to Holland for publication, but the ship carrying it was destroyed by the French. Copies of the manuscript for the complete work did not reach Holland until 1697, where it languished for 32 years in the archives of the Dutch East Indies Company. It was Jan Burmann who rescued it and prepared it for publication. Titles of volumes V and VI mounted, 3 or 4 leaves with stamp in the margin, 1 text page with marginal repair. Volume V with some occasional damstaining. Plate 70 of volume V was never published (see Hunt). The text is both in Latin and Dutch. The plates and text of the first and second issue are identical apart from the dates on the titles. Added to our set is 'Neuer Schlüssel zu Rumph's Herbarium amboinense' by J.K. Hasskarl. Halle 1866. pp. 247, vi. Stafleu & Cowan 9784: Hunt 518; Nissen BBI, 1700. 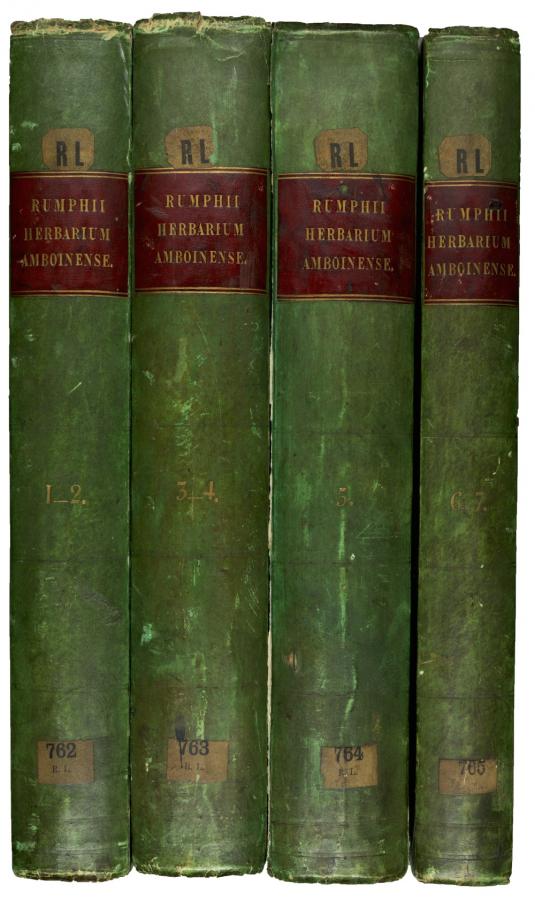