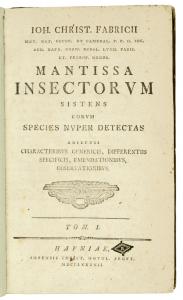 Eur 1,200 / USD 1,400
The price shown on each item does not include V.A.T (Value Added Tax). As a result of the recent EU legislation we are required to charge our EU customers the percentage of V.A.T. charged by the customer’s country of residence, unless they possess a V.A.T. registration number. Postage Additional.

Fabricius was one of the most famous pupils of Linnaeus, with whom he formed a lifelong friendship. He greatly increased the knowledge of entomology and gained a wide reputation abroad. He was primarily a systematist and originated the maxillary and cibarian system of classification of insects in which mouth parts were used to separate the order. He likewise described a large number of North American insects. In his works Fabricius described many Australian and New Zealand insects brought back by Captain Cook's around -the-world voyages. Copies of the present book are scarce, Horn-Schenkling in l928 indicate already "selten". "Fabricius's (1778) 'Philosophia Entomologica' was the first textbook of entomology and introduced an improved classification based on mouthparts; this kept natural groups together that Linnaeus's system had separated according to wing structures. Fabricius's small book also covered theoretical principles of study, nomenclature, description, and classification" (Damkaer, The Copepodologist's cabinet p. 69).


Provenance: Signature of Kikumaro Okano on inside frontcover & bookplate of F.C.J. Fischer.