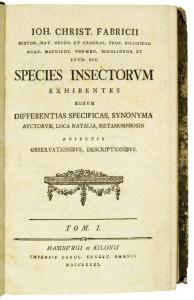 Eur 1,200 / USD 1,200
The price shown on each item does not include V.A.T (Value Added Tax). As a result of the recent EU legislation we are required to charge our EU customers the percentage of V.A.T. charged by the customer’s country of residence, unless they possess a V.A.T. registration number. Postage Additional.

"Following the appearance of the 'Systema Entomologiae...' Fabricius returned again to Europe and a professorship at the University of Kiel, taking his collections with him. Early in 1776 he wrote Banks asking if Sparrman had brought back any new insects, hoping that he might have the opportunity to see them. Forster had of course given his insects to Solander, who distributed them to Banks, the British Museum and other collectors.It was not until the summer of 1780 that the industrious Fabricius had once more the opportunity of visiting London and seeing the specimens, but few were from New Zealand. Again, a publication was forthcomming: the 'Species Insectorum...' (1781), which included eight New Zealand species some of which might have been collected by the Forsters, but at least one having been left over from the first voyage" (J. Andrews. The Southern Ark pp. 40-41). Musgrave in his 'Bibliography of Australian entomology' lists a number of new species from New Holland. Our copy contains the mostly missing 'Appendix' and 'Index Generum', pp. 495-517. The pages have been loosely inserted. Second volume with small marginal worming at the lower margin of the first few leaves.

Provenance: Bookplate of F.C.J. Fischer and signature of Kikumaro Okano on inside front-cover.