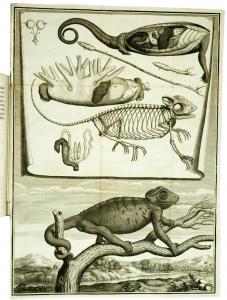 First edition and second publication of a group of French anatomists called the 'Parisians'. "Perrault was the leader of a team of comparative anatomists, that included Guichard Joseph Duverney, Jean Pecquet, Moyse Charas and Philippe de la Hire; they were often called the 'Parisians' in contemporary literature because of their membership in the Académie Royale des Sciences. Their investigations began with a thresher shark and lion from the royal menagerie and went on to encompass forty-nine vertebrate species" (The Haskell F. Norman Library of Science & Medicine p. 610). The 'Parisians' laid the foundation of our knowledge of comparative anatomy. "No such detailed and exact descriptions and illustrations had been published before" (D.S.B). One plate with tear repaired on verso with no loss of illustration.