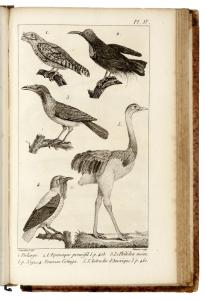 Eur 1,200 / USD 1,400
The price shown on each item does not include V.A.T (Value Added Tax). As a result of the recent EU legislation we are required to charge our EU customers the percentage of V.A.T. charged by the customer’s country of residence, unless they possess a V.A.T. registration number. Postage Additional.

A very atttractively bound copy of the rare first edition of this classic work which Singer in his 'History of Biology' describes as "the most comprehensive biological work since Linnaeus."Cuvier, also called the 'Founder of modern comparative zoology', in the foreword of the present work states that he enters a strong protest against those who would arrange all living creatures in one series. "He emphatically denies that mammals, which come last in the system, are the lowest, or that the last mammal in the series is more perfect than the first bird. Here Cuvier has certainly laid his finger on one of the weakest points of the whole series theory, as expounded by Bonnet and Lamarck, and has undeniably forestalled the conception of the relativity of the degree of evolution as held in modern times." (Nordenskiöld, pp. 339-340). "The most influential exposition of the typological approach to animal classification, representing the greatest body of zoological facts that had yet been assembled; it served as the standard zoological manual for most of Europe during the first half of the nineteenth century" (Norman Library, 567). The third volume 'Les Crustacées, les Arachnides et les Insectes' is by Pierre André Latreille.

Provenance: Signature of Duméril on title as well as the stamp of E. Oustalet, bookplate of Jacques d'Aguilar on inside front-cover.

Dibner, Heralds of Science 195; Printing and the Mind of Man 276; Sparrow, Milestones of Science 42.