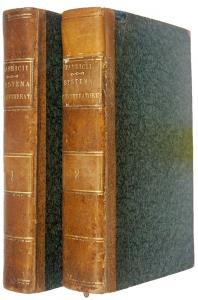 Eur 1,000 / USD 1,000
The price shown on each item does not include V.A.T (Value Added Tax). As a result of the recent EU legislation we are required to charge our EU customers the percentage of V.A.T. charged by the customer’s country of residence, unless they possess a V.A.T. registration number. Postage Additional.

Fabricius was one of the most famous pupils of Linnaeus. He greatly increased the knowledge of entomology, and described some 10.000 insects. "Two basic principles guided Fabricius' approach to entomological systematics: he distinguished, on the one hand, between the artificial and the natural characters; and, on the other hand, he stressed the importance of the various structures of the mouth." (DSB IV, p. 512). In his works Fabricius described many Australian and New Zealand insects brought back by Captain Cook's around -the-world voyages.