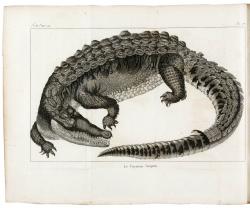 Eur 3,900 / USD 4,100
The price shown on each item does not include V.A.T (Value Added Tax). As a result of the recent EU legislation we are required to charge our EU customers the percentage of V.A.T. charged by the customer’s country of residence, unless they possess a V.A.T. registration number. Postage Additional.

Many plates show zoological matter such as shells, fishes, an octopus, crocodiles, insects as well as plants, exotic fruit and sceneries

A rare complete copy of a book which is often found with less plates. Wood quotes a copy with 17, Sabin with 20 and Leclerc with 22 plates. Stafleu 1390 listing a copy with 34 plates informs as follows: 'Number of plates (of the third volume) varies'. Michel Étienne Descourtilz (1775-1836) was a French physician, naturalist and traveller. "Following his marriage to the daughter of Rossignol-Desdunes, who had plantations in Artibonite, he went to Saint-Domingue (Haiti) in 1798, on the way visiting Charleston, South Carolina, and Santiago de Cuba. Descourtilz became involved in the Negro revolution and, in spite of the protection of Toussaint L'Ouverture was nearly executed by Dessalines... but in 1803 escaped and sailed to Cádiz... Most of his original drawings and manuscripts, as well as his herbarium, were burned in Haiti; and in writing his books he had to rely on the works of Plumier, Joseph Surian, Alexandre Poiteau, and Turpin. His zoological contributions, particularly those on the caiman, were highly praised" (DSB). Descourtilz is better known for his 'Flore Pittoresque et Médicale des Antilles'. Many plates show zoological matter such as shells, fishes, an octopus, crocodiles, insects as well as plants, exotic fruit and sceneries. An uncut copy, signed by Descourtilz on verso of first title.