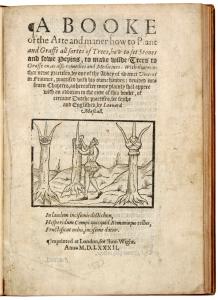 A booke of the Arte and maner how to Plant and Graffe all sortes of Trees, how to set Stones and sowe Pepins, to make wilde Trees to graffe on, as also remedies and Medicines...

Eur 9,800 / USD 11,300
The price shown on each item does not include V.A.T (Value Added Tax). As a result of the recent EU legislation we are required to charge our EU customers the percentage of V.A.T. charged by the customer’s country of residence, unless they possess a V.A.T. registration number. Postage Additional.

Fourth edition. The first was published in 1569 and together 8 editions appeared in the 16th century. A rare early treatise on fruit trees, tree planting and crafting. "Most of the work is a translation of 'l'Art & maniere de semer, & faire pepinieres des sauvageaux' by Brossard, a French Benedictine monk. The earliest edition of the French work currently known is dated 1543. Relatively little is known about the translator, Leonard Mascall (d. 1589), apart that he was the author of a number of other books on fishing and animal husbandry, owned a mansion in Sussex... The unsigned illustrations are primarily of tree planting and grafting and include a full-page illustration of cutting tools" (Johnston 107).