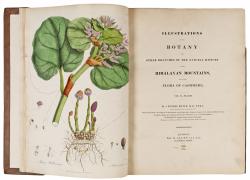 Illustrations of the Botany and other branches of the Natural History of the Himalayan mountains and the Flora of Cashmere.

Eur 8,000 / USD 8,400
The price shown on each item does not include V.A.T (Value Added Tax). As a result of the recent EU legislation we are required to charge our EU customers the percentage of V.A.T. charged by the customer’s country of residence, unless they possess a V.A.T. registration number. Postage Additional.

First and only edition. A fine copy of the first major work on the Himalayan flora. "A pioneering ecological study, with descriptions of the different types of vegetation and notes on the distribution of families and genera in the region" (Rix p. 183).
John Forbes Royle (1799-1858) was born at Cawnpore, in India and studied medicine at Edinburgh University. He was surgeon to the East India Company and curator of the Saharunpore botanical gardens. One of the author's interests were the drug plants of the region and on page 240 he recommended the introduction of cinchona (i.e. quinine) to India. Many of the fine plates are by Indian artists such as Vishnuprasad and M. Gaucci. "During the eighteenth century as the Mughal Empire declined, Indian painters formely under Mughal patronage sought work from employees of the Hon. East India Company, many of whom were eager collectors of drawings of Indian plants and animals... Many hundreds of magnificant drawings made by Indian artists during the early part of the nineteenth century under the direction of British botanists such as Royle, Carey, Falconer, Wallich and Roxburg are now in the Kew Herbarium (Blunt & Stearn p. 185). Half title of atlas volume with small paper repair at lower margin.