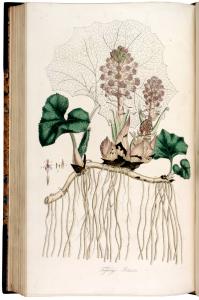 Flora Londinensis: containing a history of the Plants indigenous to Great Britain, illustrated by figures of the natural size.

Eur 15,000 / USD 16,500
The price shown on each item does not include V.A.T (Value Added Tax). As a result of the recent EU legislation we are required to charge our EU customers the percentage of V.A.T. charged by the customer’s country of residence, unless they possess a V.A.T. registration number. Postage Additional.

The impressive 'Flora Londinensis' is much more comprehensive in scope than its title suggests, for it embraces most of the English flora

A reissue of the second, much enlarged edition. The second edition was published from 1817-1828. "Henry Bohm took over the remaining copies of this second edition and issued them in 1835 with new title-pages, carrying the date 1835" (Stafleu & Cowan 1286). The first three volumes contain the original 432 plates, but the text rewritten by Hooker. The final two volumes are entirely new, with the plates mostly from drawings by Hooker, together with his own descriptions. The impressive 'Flora Londinensis' is much more comprehensive in scope than its title suggests, for it embraces most of the English flora, and as a result of which it should be properly regarded as the first colour-plate national flora. "Curtis adopted the novel plan of having specimens drawn to a uniform scale and to life size, and most of the plates display a high degree of accuracy. In the opinion of Salisbury, the majority of the figures 'represent the most successful portrayals of British wild flowers that have ever been achieved'" (Henry II, p. 67). The fine plates are by James Sowerby, Sydenham Edwards, and Hooker. William Curtis is one of the great names in botany, the present work and his famous 'Botanical Magazine' are landmarks in English botany. Restored marginal tear to title page of 5th volume and blind library stamp on title pages. A fine copy without the usual foxing.