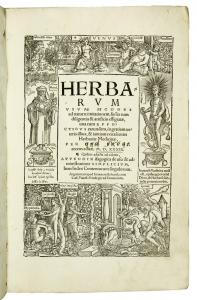 A very fine Large Paper copy, much larger than copies we have had or seen. Both volumes in the second edition. The first edition of the first volume is exceedingly rare. "A genuine milestone in the history of the botanical sciences.. " (Tomasi & Willis. An Oak Spring Herbaria p. 31). "This is an important book. Brunfels was the first great mind in modern botany and as Sachs says, a new epoch of natural science began with Brunfels...."(Hunt 30).

A celebrated herbal which marks an epoch in the history of botanic illustration. It was the first herbal illustrated with drawings which are throughout both beautiful and true to nature. The plants are represented as they are in the greatest possible artistic perfection by Weiditz, one of the best German illustrators, whose name appears in the book. "Weiditz accepted Nature as he found her. Was a leaf torn or drooping, a flower withered?- he observed the fact with the cold eye of the realist and recorded it with the precision of a true craftsman. The beauty was never wantonly sacrificed to mere scientific accuracy; the poet in him always triumphed, the artist in him always prevailed. His work must ever remain the high-water mark of woodcutting employed in the service of botanical illustration" (Blunt p. 47).
Posthumously a third volume was published in 1536 by Michael Herr, which is seldom found with the first two volumes, and which was illustrated by another artist.