First edition. A very fine copy bound in a very attractive contemporary German binding. Described by the Hunt catalogue as the first botanical book to utilise colour-printed mezzotint successfully. It also contains Georg Dionysus Ehret's first published botanical illustrations (although unsigned). Ehret served his apprenticeship as a botanical draughtsman under Weinmann who exploited him mercilessly, paying him a pittance for several hundred drawings he did for the 'Phythanthoza'. This led to a falling out between the two, which is perhaps why Ehret is nowhere acknowledged in the book. His drawings were engraved by Bartholomäus Seuter, Johann Ridinger and, in the later volumes, Johann Jakob Haid, who also engraved Ehret's plates for Trew's 'Plantae selectae'. Weinmann (1683-1741) was a Regensburg apothecary who organised this massive publishing project. It was financed by Seuter, one of the engravers. The text for the first twenty-five plates was written by Johann Georg Nicolaus Dieterichs (1681-1737), who was succeeded by his son Ludwig Michael (1716-1747), and the work was completed after Weinmann's death by Ambrosius Karl Bieler (1693-1747). 'The mezzotint process used [here] had been invented by Johann Teyler in the Netherlands around 1688. As practised here by Bartholomäus Seuter (1678-1754) and Johann Elias Ridinger (1698-1767), it was really a combination of etching and mezzotint, which made possible delicate lines and a very fine grain. The addition of handtinting brought about unusual and subtle effects. Some of the best work was done in later volumes by Johann Jakob Haid (1704-1767), who also provides portraits of Weinmann and Bieler' (Hunt catalogue vol. II part II p. 160). '373 plates are signed S for Seuter and 273 plates signed H for Haid. The plates are after originals by Ehret, N. Asamin, and others, although none is so marked on the plate' (Johnston). A mint copy without the usual foxing and one of the finest copies we have seen of this rare work. Dunthorne 327; Great flower books p. 80; see Hunt 494; Johnston 388; Nissen BBI, 2126; Stafleu and Cowan 17050. 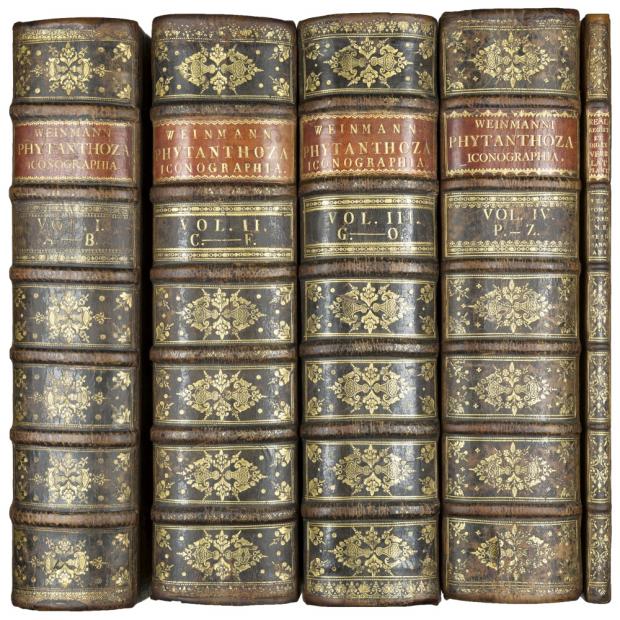