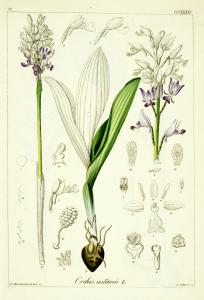 The coloured issue is scarce

After John Lindley's death Heinrich Gustaf Reichenbach became the 'Orchid King'. Orchid specimens from all over the world were sent to him for identification, these with his sketches and copious notes went to build up an immense herbarium. "Though best known as an orchidologist, botanists in general owe him a debt of gratitude for his collaboration in his father's 'Icones'" (Reinikka, History of Orchids p. 215). The present work was issued in a plain and coloured edition, it forms vols. XIII of the 'Deutschlands Flora...', and this section on orchids was wholly by him. This task, his preface says, occupied him ten years. The coloured issue is scarce, and always has 5 plates not coloured.