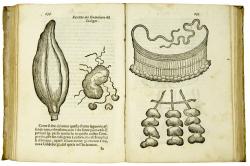 Eur 1,800 / USD 1,800
The price shown on each item does not include V.A.T (Value Added Tax). As a result of the recent EU legislation we are required to charge our EU customers the percentage of V.A.T. charged by the customer’s country of residence, unless they possess a V.A.T. registration number. Postage Additional.

a treatise on medical plants of India

A later Italian translation by Briganti of Orta and Monardes. This translation is made from Clusius' Latin translation of both works and not from the original. It illustrates how European knowledge of the texts of Orta and Monardes was principally disseminated via Clusius' version rather than the Portuguese and Spanish originals.
Orta's work was first published in Goa in 1563 and is a treatise on medical plants of India. The first edition of Monardes was published in Sevilla, 1565. Monardes tells of the various herbs and gums brought from the New World and their medicinal virtues. He writes of Copall, Anime, Tacamahaca, Balsamo, Guiacum, the most interesting Mechoacan, etc. Furtheron this work contains the first written account and illustration of tobacco, its use as a wound-herb and in the religious ceremonies of the Red Indians.