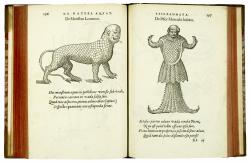 The cuts include the famous 'monk' and 'bishop' sea monster

A mint copy of the first and only edition. Boussuet's epitome in Latin (and some in Greek) verses of Rondelet's 'Libri de Piscibus'. It is illustrated with the same excellent 466 woodcuts by George Reverdy, a most skilful draughtsman working in Lyon from 1529 to 1564, as occur in Rondelet's work. He admirably captured the features of the great variety of fishes and shells. The cuts include the famous 'monk' and 'bishop' sea monster, of which according to Rondelet, the first was seen in Norway and the second found in Poland in 1531. The verses of Boussuet, a doctor in medicine, include much information about the taste and nature of fish meat and shells. The first part deals with fish only, the second part largely deals with shells.