A highly unusual archive of botanical illustrations of the botanical garden at Lemberg, now L'viv, Ukraine, then part of the Austro-Hungarian empire, executed by Adolf Weiss, the pre-eminent Austrian botanist of his day. The collection contains 13 drawings of Australian plants: Banksia Robur, Banksia Praemorsa, Banksia Serrata, Banksia Spinulosa, Banksia Integrifolia, Banksia Marginata, Banksia Microstachya, Banksia Oblongifolia, Banksia Dentata, Banksia Serrata, Banksia Dentata, Banksia Ericaefolia and Banksia Oleaefolia. The drawings are of a very high quality and Weiss was known to be an accomplished artist: "... die seltene Meisterschaft in der Handhabung von Pinsel und Feder macht die Abbildungen... zu den auch künstlerisch vollendesten, die wir besitzen (... the rare mastery and use of the brush and pen make [his] illustrations the most artistically accomplished we have) (Oesterr. Bot. Zeitschrift, 1884). Each drawing shows the plant in flower, with anatomical details supplied below. Most of the sheets have the Linnaean binominals at the foot. Each is surrounded by a border either scored or in pencil, which presumably was intended to indicate the size of an engraved plate. Likewise reference is made at the bottom to Kunth's 'Enumeratio plantarum' (5 vols, 1833-1850) indicating volume and page. All drawings are all in the same style; two have been signed by 'A Weiss del.', and one with initials only. This one shows an 'Aloë marginalis' in a wooden barrel with Weiss' initials A.W. dated 2/3 [18]65 Lemberg. It is a portrayal of the plant as it flowered in the Lemberg botanical garden. Weiss published a paper on the Aloë 'Agave Jacquiniana' which had flowered in the Lemberg Garden in 1864. Weiss was assisted by his wife Hermine, and two drawings bear her signature, 5 drawings have initials of W (Weiss) and H (Hermine). In style the drawings are quite accomplished and graceful, and resemble some of the best botanical illustration of the end of the eighteenth and beginning of the nineteenth century. Adolf Weiss (1837-1894) was born at Freiwaldau, Silesia. Between 1855 and 1858 he attended the University of Vienna where he studied botany. In 1862 he was appointed professor of botany and director of the botanic garden at Lemberg, but before taking up this post he undertook a tour of Italy, France, Switzerland and Germany to study botanical gardens in those countries and to forge links between them and Lemberg. Under Weiss's direction, the Lemberg gardens became the finest in the Austro-Hungarian Empire, with rare examples of flora of Lemberg and the Carpathians. Weiss published on the flora of Lemberg (1865). Together with Jarolim, an assistant of his institute, he made numerous excursions to collect plants in the Lemberg area and his herbarium was still preserved in the Lemberg University Museum in 1881. In 1872 he moved to the University of Prague, where he founded the first institute of plant physiology in the Empire. Weiss was the undoubtedly the most important Austrian botanist and plant anatomist of his time and is best remembered for his publications on plant anatomy. It is sad that today he is all but forgotten in Lemberg where he did his most important work. Sadder still, there is now scarcely a trace of his fine botanical garden. The present collection therefore remains a unique testament to this influential botanist and his garden. Together with the plates there are some leaves with plant names and numbers; on one there is Weiss' name dated 12.7.65. Oesterr. Bot. Zeitschrift XXXI, 1881 'B. Blocki, Dr. A. Weiss' Herbar im Lemberg Universitätsmuseum'; Oesterr. Bot. Zeitschrift, XXXIV, 1884 'Gallerie österreichischer Botaniker, XXX. G. Adolf Weiss'; Oesterr. Bot. Zeitschrift XLIV 'A. Nestler, G.A. Weiss (obituary); Wurzbach, Biographisches Lexikon des öst. Kaiserstaates, LIV, 82ff. 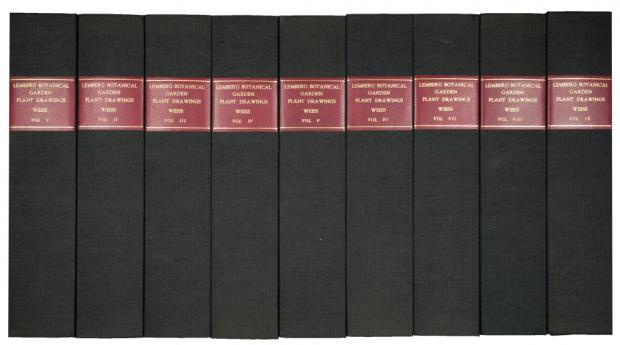