As the inscription on the verso records, these birds were seen by Van Royen in the collection of the eminent Amsterdam merchant, Theodorus de Leeuw (1679-1744), at his country house of Elsenburg, on the river Vecht, near Maarssen. De Leeuw lavished considerable resources on improvements to this rural retreat, and seems to have commissioned Daniel Marot to design an elaborate summerhouse in the grounds (for further information, see R. van Luttervelt, 'De Buitenplaatsen aan de Vecht' 1948, pp. 100-2). Another watercolour of birds by Van Royen (sold, Dordrecht, Mak, 5 October 1993, lot 37) is also dated 1735 and inscribed with the name of De Leeuw, and there is also an 18th century sale record of a painting by Royen of birds on the terraces of Elsenburg (sold, Amsterdam, P. van der Schley/ J. Yver, 18 July 1786, lot 277). Together these are the only three known examples of the works by Van Royen that can be linked with a specific patron. Relatively few drawings of Van Royen are known, but these include dated works from as early as 1711 (sold, London, Sotheby's, 19 June 1973, lot 62), which stand as important precursors of the bird watercolours of Aert Schouman and the younger generation of Dutch artists. Exhibited: Leeuwarden, Museum Het Princessehof, 'Oude tekeningen uit drie eeuwen; Collectie Hans van Leeuwen', 1977, cat. no 46; Amsterdam/ Dordrecht 1994-5, cat. no. 42, reproduced in colour p. 6. 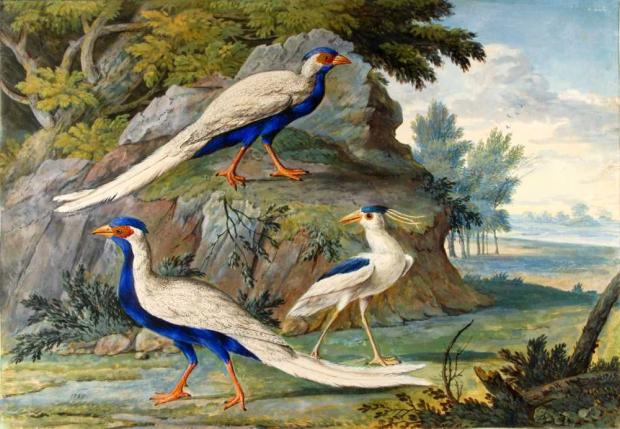