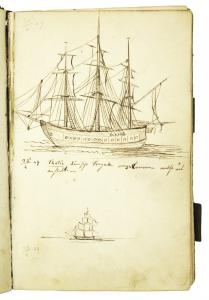 Eur 28,000 / USD 30,800
The price shown on each item does not include V.A.T (Value Added Tax). As a result of the recent EU legislation we are required to charge our EU customers the percentage of V.A.T. charged by the customer’s country of residence, unless they possess a V.A.T. registration number. Postage Additional.

The diary in form of a sketchbook in chronological order of Freiherr Ernst von Bibra's well-known voyage to South America. Ernst von Bibra (Schwebheim 1806 - Nüremberg 1872) was a famous naturalist and traveller and one of the early pioneers writing on psychoactive drugs. As a result of his voyage he published his 'Reise in Südamerika' in 1854. The title of the present manuscript has the following device: 'Wen(n) Euch nicht gefällt was ich hier gezeichnet, so ist mir das gleich. Ist auch solches nicht desshalb geschehen, sondern nur damit ich selbst eine Erin(n)erung habe, an das, so ich in fremden Lande gesehen' [When you do not like what I have written, I do not care. It is not for you, but to have a recollection what I have seen in foreign countries].
Almost all drawings have pencil annotations many with dates, starting 14.4. (18)49 ending 4.7.(18)50.
The first drawing shows an early bronze of an animal in the Bremen cathedral; followed by portraits of probably crew members or passengers (Lamers, Friedmann, Kunitz, Kühn and others); profiles of the coast of Portland (England); medusa; a flying fish; the coast of Brasil; the coast near Rio de Janeiro; several drawings showing the harbour entrance of Rio de Janeiro and its surroundings; a detailed landscape with palm trees, agaves and mountains signed Rio de Janeiro 27.6.49; several detailed drawings of Cape Horn; the coast of Chile (Valdivia & Conception); Valparaiso seen from the sea; a view of Valparaiso town and harbour; 2 drawings of an aloe; la casa del Caballero Michael Dores; a view of the Cordillera; a camp with tent, rifle, fire etc. in the Cordillera; illustrations of the island 'mas a fuerta'; the harbour of Porto Coral; an old Spanish chapel of Porto Coral; several plates of indians; a skull of a whale; a view of Tocopilla; detailed study of porphyry rocks; a view from the roof of the hotel in Callas; some exotic fruit; an old Peruvian mummy; a shark; crustacea; several exotic fishes; a number of plates of evertebrates with the longitude and latitude; the Eddystone lighthouse; a section of 6 plates with a separate ornamental title 'Nautica' portraying a ship, sails and ship equipment.

Bibra wrote several scientific works regarding his voyage, one of which 'Beiträge zur naturgeschichte von Chile' was published in the 'Denkschriften der Kaiserl. Akad. der Wissenschaften' 1853. On the first page he mentions that he will consult his [the here offered] 'Tage- und Skizzenbuch' [diary- sketchbook] in writing the article. Plate vii 'Fernsicht von der hohen Cordillera über das Flachland von Chile bis zur Küsten-Cordillera' is an exact copy of a plate found in his sketchbook. On page 95 of his article he writes 'Ich habe eine Zeichnung an Ort und Stelle zu entwerfen gesucht ... und habe sie auf Taf. vii, beigegeben [I made a drawing on the spot, which is shown on plate vii].

Ernst von Bibra studied law, chemistry, and medicine at the University of Würzburg. In 1824 he inherited the family estate, allowing him to travel and study without worrying about money. In 1855 he published 'Die narkotischen Genussmittel und der Mensch'. The work is based on his experience in South America and became a pioneering study of psychoactive plants and their role in society. Drawing on his own travel experience as well as the writings of his predecessors, Baron Ernst von Bibra devotes a full chapter to each of seventeen plants, ranging from such mild stimulants as coffee and tea, through tobacco and hashish, to powerfull narcotics and hallucinogens such as opium and fly agaric. This classic text on the use of mind-altering plants was translated into English and still is a famous and classic text.