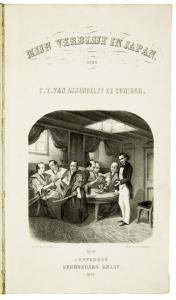 First and only edition. "Cornelis Theodoor van Assendelft de Coningh (1824-1890) had been in Japan in 1845 while serving as a junior officer on board a ship of the Dutch East India Company. Although on that occasion scarcely even setting foot on shore, he nevertheless seems to have gained a most favourable impression of the land. It was thus, he writes, with great pleasure that in May of 1851, now captain of the Joän and based in Surabaya, he received orders from the Dutch government to sail once more for Japan. He arrived in Nagasaki in August and stayed for three months, during which time he not only made the notes which form the basis of the present work, but did a small amount of research into records concerning the strange and elusive figure of Count Benyowsky. He is also author of two volumes of memoirs.
The present work, a slim volume in paper covers, is as the title suggests a journal of the author's stay in Japan. It is perhaps chiefly of interest for the side-glances it affords on relations between the Dutch in Dejima and the officials of the bakufu" (Nipponalia. Books on Japan in European languages in the library of the Kyoto University of foreign studies, no. xix).

Small dampstain to lower magin of title. A fine copy of this rare item.