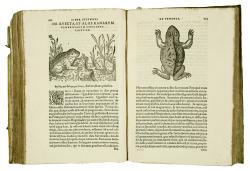 Eur 3,800 / USD 4,400
The price shown on each item does not include V.A.T (Value Added Tax). As a result of the recent EU legislation we are required to charge our EU customers the percentage of V.A.T. charged by the customer’s country of residence, unless they possess a V.A.T. registration number. Postage Additional.

First Latin edition of this important work on toxicology. The first French edition was published by Plantin in 1568. The present Latin edition was translated from the French by the Augsburg physician Hieremias Martius. Jacques Grevin (c. 1539-1570) was a French poet and dramatist and disciple of Ronsard. "Grevin was originally educated as a physician, and wrote several works on medical and scientific topics. His two books on poisons, while adding nothing new to toxicological knowledge, showed a distinctively skeptical and realistic attitude towards the writings of both classical and modern authors, with whom Grévin often disagreed. He also casts doubt on several superstitious beliefs, such as the efficacy of amulets against poison, or the turquoise's power to detect the presence of toxic substance. Two books on poisons was published with Grevin's verse translation of 'Theriaka' and 'Alexipharmaka', two didactic poems on poisonous plants and animals by the Hellenistic physician Nicander of Colophon (b. ca. A.D. 275)" ('The Haskell F. Norman library of Science & Medicine' 439, quoting the French edition).
The excellent woodcuts show snakes, amphibia, scorpions, fish, a dog suffering from rabies, poisonous plants etc.