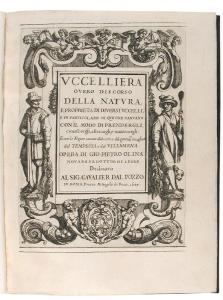 Eur 3,500 / USD 3,500
The price shown on each item does not include V.A.T (Value Added Tax). As a result of the recent EU legislation we are required to charge our EU customers the percentage of V.A.T. charged by the customer’s country of residence, unless they possess a V.A.T. registration number. Postage Additional.

a book on bird catching, delightful, chiefly owing to Tempesta's spirited illustrations of the methods employed by fowlers in the beginning of the 17th century

The second and according to Schwerdt superior edition. The first edition appeared in 1622. '...a book on bird catching, delightful, chiefly owing to Tempesta's spirited illustrations of the methods employed by fowlers in the beginning of the 17th century. Olina was not, however, the originator of this work, which was an adaptation of an earlier publication entitled "il canto degl' avgelli", written by Valli da Todi, and printed at Rome in 1601... and it is curious that Olina could have issued his 'Uccelliera' within twenty years of its appearance without making any reference to the original author and yet have escaped detection' (Schwerdt II, p. 48). In addition to the different bird species, the work deals with different methods of catching birds and the art of keeping them in captivity, as well as their diseases.
"Chiefly song-birds are represented of the natural size (pp. 1-50), but in addition (pp. 51-81) there are plates of partridge and quail netting; partridge-hawking with the Goshawk; trap to catch a Sparrow-hawk; and illustrations of the mode in which bird-catchers employ the Little Owl (Civetta) and falconers the Eagle Owl (Gufo)..." (Harting, Bibliotheca Accipitraria 278).

Faint waterstaining at lower right corner of first leaves, else a fine copy with excellent impressions of the plates.