An attractive uniformly bound copy of the first French edition in 4to, of one of the most splendid narratives in the literature of African exploration. "Bruce's most notable journey began in Alexandria in June 1768. He travelled extensively in Ethiopia and claimed to have been the first European to find the source of the Nile (on 4 November 1770), he did know that the Portuguese Jesuit missionary Piedro Páes had been there more than a century earlier. Bruce actually had found the source of the Blue Nile, the main tributary of the White Nile, which it joins below Khartoum. He knew of the White Nile, although he denied that it was the major branch. James Bruce was justly considered an explorer rather than an adventurer because of his scientific approach. Before setting out, he learned as much as was known about the geography, customs, and languages of the area. Bruce brought back drawings of buildings, fauna, and flora, collected seeds; and kept precise meteorological and astronomical records. His writings are generally accurate... (DSB). The first French edition was published in 8vo and 4to.

About half the plates show plants, the specimens collected went to Sir Joseph Banks and Lamarck, the other plates show a.o. birds, reptiles, mammals, and people. Bruce manuscripts are at the Royal Society, London. With the bookplate of Philippe de Vilmorin. 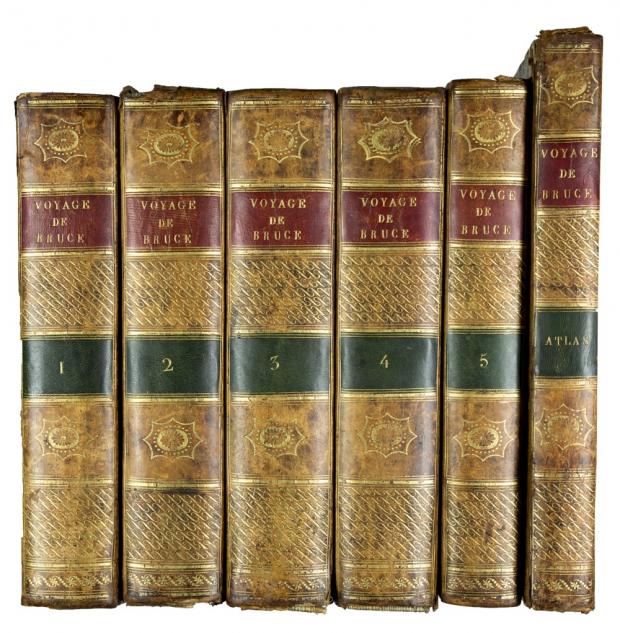