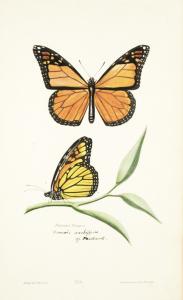 American Entomology. A description of the Insects of North America. Edited by John L. Le Conte, M.D. with a memoir of the author, by Georg Ord.

Eur 1,700 / USD 1,900
The price shown on each item does not include V.A.T (Value Added Tax). As a result of the recent EU legislation we are required to charge our EU customers the percentage of V.A.T. charged by the customer’s country of residence, unless they possess a V.A.T. registration number. Postage Additional.

Thomas Say (1787-1834), was one of the premier native born American naturalists of the early nineteenth century

The complete entomological works of Thomas Say, assembled by LeConte. The present work is the second edition of the complete works, the first being published in Boston 1859. Included in the present work is Say's 'American Entomology' published in Philadelphia 1824-28 "which earned him the title of 'father of American entomology'... Its detailed and accurate descriptions, with more than a thousand new species, are supplemented by splendid colored illustrations" (Nature in the New World, 23). Thomas Say (1787-1834), was one of the premier native born American naturalists of the early nineteenth century. Some very faint marginal waterstaining to a few leaves.