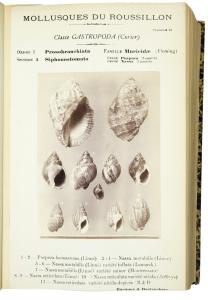 Eur 1,800 / USD 2,100
The price shown on each item does not include V.A.T (Value Added Tax). As a result of the recent EU legislation we are required to charge our EU customers the percentage of V.A.T. charged by the customer’s country of residence, unless they possess a V.A.T. registration number. Postage Additional.

one of the early scientific works making use of original photographs

B.M.(Nat.Hist.) I, 277. This rare work was issued in 26 parts in a very limited edition, one of the early scientific works making use of original photographs (in the first 13 parts). 'One of Europe's most outstanding collectors was Philippe Dautzenberg, of Ixelles, near Brussels. Heir to a fortune in the carpet industry he could afford to spend a great deal of money on shells and conchological literature. A born collector, Dautzenberg accumulated specimens with a zeal and a discernment rarely equalled; and by 1914 it was estimated that his cabinets contained thirty thousand species ... with E. Bucquoy and G.F. Dollfus (he) wrote a large work on the marine molluscs of the Roussillon, South France, generally recognised as the best available account of western Mediterranean molluscs' (Dance p. 165).