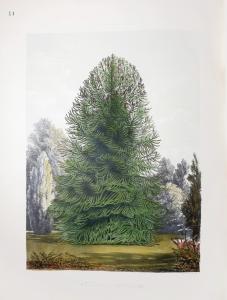 Eur 15,000 / USD 15,800
The price shown on each item does not include V.A.T (Value Added Tax). As a result of the recent EU legislation we are required to charge our EU customers the percentage of V.A.T. charged by the customer’s country of residence, unless they possess a V.A.T. registration number. Postage Additional.

both Napoleon III and Queen Victoria subscribed to its first edition

First edition of one of the greatest British works on Pines. 'The Pinetum Britannicum' is regarded as a landmark publication on conifers, and both Napoleon III and Queen Victoria subscribed to its first edition. This wonderful, illustrated work was the result of over twenty years of collaboration and research. The tree portraits in colour are predominantly from the original drawings of William Richardson, those of cones and leaves by Dr Greville and James and Robert Black, and the characteristic sketches of the Deodar Cedars in vol. 3 were captured 'in the field' by Lady Canning during her time in India.
The extensive woodcut illustrations throughout the text were also executed by multiple hands; Andrew Murray, James M'Nab, Dr Greville and Dr Maxwell T Masters. Meanwhile, leading conifer specialists of the day, from institutions such as the British Museum, Royal Horticultural Society and Royal Botanical Gardens, as well as individual professors from Florence, Berlin and Paris, and several private experts, all contributed to enhance the publication.
On its commencement in 1863, the project received immediate royal support; Queen Victoria requested the work be dedicated to the memory of the recently deceased Prince Albert and provided photographs of two specimens at Osborne House for inclusion, while Emperor Napoleon III secured thirty copies for distribution among French schools of Forestry and Agriculture. One of the greatest coniferous iconographies of the nineteenth century. A fine copy.