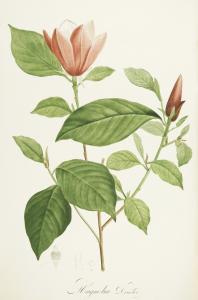 Eur 85,000 / USD 85,000
The price shown on each item does not include V.A.T (Value Added Tax). As a result of the recent EU legislation we are required to charge our EU customers the percentage of V.A.T. charged by the customer’s country of residence, unless they possess a V.A.T. registration number. Postage Additional.

There were 18 new Australian plants, with 24 figured

A fine copy containing Redouté's finest botanical illustrations. "The great opus of Redouté was now to come: the production of those sumptuous flower-books with colorplates of unsurpassed magnificence, 'Les Liliacées' and the 'Jardin de la Malmaison'? the cost of such works was so great as to have been prohibitive ? an effective patronage was required. This patronage Redouté found in ? Josephine de Beauharnais? Napoléon, still on his way to the stars, had married her in 1796 and two years later she acquired the charming property of Malmaison somewhat to northwest of Paris? Her artistic and horticultural interest predisposed her to be attracted to Redouté? In this way the garden at Malmaison? soon became unique of its great choice of exotic flowers from both the temperate and subtropical regions. The enthusiastic and splendor-loving Joséphine wanted to have her garden adequately described and the plants beautifully portrayed. Etienne-Pierre Ventenat (1757-1808)? was engaged to provide the descriptions, Redouté was to be the artist? Napoléon, too, has an indirect role in this volume for Joséphine knew how to spend his money, and she spent it liberally" (Stafleu. Redouté- Peintre de Fleurs pp. 19-20).
The work also has an Australian interest. "There were 18 new Australian plants, with 24 figured" (Mabberley. Botanical Revelation. European encounters with Australian plants before Darwin p. 162). Only 200 copies were printed. With old manuscript dedication to 'Madame et Monsieur de Saint Paul' by E.A. Baracque on half title.