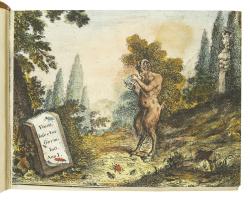 Eur 6,000 / USD 6,600
The price shown on each item does not include V.A.T (Value Added Tax). As a result of the recent EU legislation we are required to charge our EU customers the percentage of V.A.T. charged by the customer’s country of residence, unless they possess a V.A.T. registration number. Postage Additional.

the most beautiful miniature entomological work ever published

A very fine uniformly bound set of the first 67 parts of the most beautiful miniature entomological work ever published. The first 109 parts were published by Georg Wolfgang Franz Panzer (1755-1829). "There does not exist a more accurate or useful work. The figures are drawn and etched by the famous Sturm, the best entomological artist on the continent; ... while the descriptions, although frequently too short, are written by hand of a master. The system of Fabricius is followed and the work altogether is highly essential to every one who writes upon the entomology of Europe" (Swainson). Part 110 was published by Geyer, and Herrich-Schaeffer published parts 111-190. The continuation of Panzer's work is very scarce due to a decreasing number of subscribers.
"Die alte bayrische Schule der naturwissenschaftliche Illustrationen hat sich unsterbliche Verdienste besonders um die Entomologie erworben. Sie hat die schönsten Abbildungswerke dieser Wissenschaft geliefert" (Junk. Rara II, p. 142).
Jacob Sturm (1771-1848), who illustrated and engraved parts 1-109, was born in Nuremberg. His father Johann Georg Sturm was an engraver. Jacob Sturm was the editor and illustrator of several natural history works such as his 'Deutschlands Flora in Abbildungen nach der Natur mit Beschreibungen'. Apart from this he illustrated a great number of the finest natural history works published at that period in South Germany. "This is one of the most prodigious of the illustrated tomes in entomology ever to have been produced and shows the progress of taxonomy that took place during that span of years because Panzer included the most up-to-date synonymical history for each species, sometimes predating publication of works in preparation by colleagues who gave him information and specimens from their respective works" (Evenhuis p. 600). Added 39 duplicate plates with descriptive text.