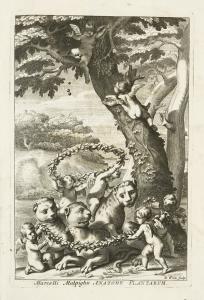 Eur 4,500 / USD 4,600
The price shown on each item does not include V.A.T (Value Added Tax). As a result of the recent EU legislation we are required to charge our EU customers the percentage of V.A.T. charged by the customer’s country of residence, unless they possess a V.A.T. registration number. Postage Additional.

First edition of the foundation of plant anatomy

First edition of the foundation of plant anatomy. "Pioneer work in plant growth, representing the first attempt to describe the more obvious anatomical and histological features of stems, leaves, and fruits of plants" (Horblit 43a). Along with Nehemiah Greg, Malpighi is considered the founder of the microscopic study of plant anatomy. "They were both exceptionally able investigators who exploited the now popular 'magnifying glasses' to take a new look at plants. It may be said that both penetrated as deeply into the plant structure as the optical limitations of their microscopes would allow... Furtermore, both illustrated their work with many labelled figures - accurate, detailed and beautiful - establishing henceforth a high standard of critical excellence for researches in this field" (Morton). "Malpighi acquired great skills as a microscopist; he was also an accurate draughtsman, and his figures of plant anatomy illustrating his work are outstanding. As Miall remarks, 'we are often astonished that so early an investigator should have seen so much and understood so well what he saw'" (Henrey). Plate 22 is misbound and inverted. Some text leaves and plates browned.