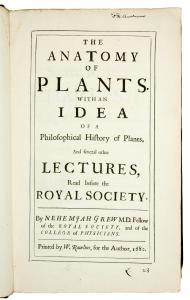 Eur 5,500 / USD 6,300
The price shown on each item does not include V.A.T (Value Added Tax). As a result of the recent EU legislation we are required to charge our EU customers the percentage of V.A.T. charged by the customer’s country of residence, unless they possess a V.A.T. registration number. Postage Additional.

the birth of microscopic anatomy of plants

First edition. "First to observe sex in plants - the birth of microscopic anatomy of plants" (Horblit 43b). "First complete edition of Grew's chief work which gained him the reputation of being one of the most distinguished scientists of the 17th century. A portion of it had already been published as 'The Anatomy of Vegetables Begun' in 1672?' (Hunt 362).
"Along with Malpighi - whose work Grew knew of and admired - Grew is considered the founder of plant anatomy, and this revised collected edition of three earlier treatises (The anatomy of vegetables begun, An idea of a phytological history propounded [1673], and The comparative anatomy of trunks [1675]) represents the first textbook on the subject. Grew's pioneering investigations into how organs and tissues are formed during plant growth led to the conception of the plant as a coordinated developing structure and marked the beginning of efforts to link structure and development. He related plant morphology to underlying principles of anatomical structure, and showed that morphological entities could be defined not only by their function, but also by their structure, mode of origin, and development. Along with Malpighi, Grew was the first to investigate internal plant anatomy: with the aid of the microscope, he demonstrated that all plants have a characteristic ordered inner structure, (illustrated in his accurate and beautiful plates) and that all plant tissues could be broadly divided into 'lignous' (fibrovascular) and 'pithy' (parenchymatous) categories. He showed that the 'cells' first observed by Robert Hooke made up the normal structure of the parenchyma, and came very close to recognizing the universal cellular structure of plants. He believed that a plant's sexual organs were contained in its flowers, and recognized the stamen to be a male organ" (Hook & Norman, The Haskell Norman Library of Science and Medicine, 946). The engraved plates are of great beauty and precision. A fine copy of this rare book.

Provenance: Label of 'Tixall Library'. The famous book collection of Frederick Augustus Talbot Clifford Constable sold by Sotheby's in 1899 and the present book was probably purchased by W. Junk, Berlin, whose label is also found on the inside of the front-cover together with a label of P.G. Lowe. Name of F.M. Andrews in the upper margin of title.