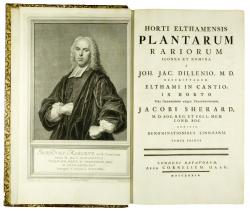 A nicely bound copy of noble provenance. The copy of the Earl of Caledon with his armorial bookplate. Second edition, a reissue, without the original text, but with an index of Linnaean names. The first edition was published in London in 1732. A very fine and clean copy of 'the most important book to be published in England during the eighteenth century on the plant growing in a private garden' (Henrey) and a major work for the pre-Linnaean taxonomy of South African plants. "Johann Jacob Dillenius (originally Dillen) (1684-1747) (was) a German botanist from Darmstadt, who was brought to England in 1721 by William Sherard to help with the latter's projected revision of Caspar Bauhin's 'Pinax' of 1623 ... About this time, William Sherard's brother James, who had a flourishing medical practice in London, purchased a country estate at Eltham in Kent. William spent a good deal of time on the property and, assisted by Dillenius, built it up into one of the leading gardens in England. When William died in 1728 he endowed a chair of botany at Oxford with the provisio that Dillenius should be the first incumbent. He also left his herbarium, library and manuscript to the University. At the insistance of James Sherard, Dillenius embarked on an account of the more interesting plants growing at Eltham, with the result that he did not take up residence at Oxford until 1734. The resulting 'Hortus Elthamensis', London 1732, appeared in two handsome folio volumes with 324 (sic; 325 is in fact the correct number) plates drawn and engraved with great fidelity by Dillenius himself. Their superb quality may be seen from the two examples reproduced herewith. Many South African plants are illustrated, particularly succulents, including an almost complete coverage of the 'Mesembryanthemums' then known in cultivation. The illustrations are important in typifying many Linnaean names and, unlike Bradley, Dillenius made herbarium specimens, which are preserved in the herbarium of the Botany Department, Oxford' (Gunn & Godd, Botanical exploration of South Africa pp. 63-4). Dillenius's name was memorialised by Linnaeus in the genus 'Dillenia', a genus of Australian and Asian evergreen plants.
The present copy has the engraved portrait of Johannes Alberti (dated 1745) bound in. Other copies do not have this portrait. Alberti (1698-1762) was the Rector Magnificus of the Leyden University, and Prof. of Theology with a broad interest in science and literature.
The fine engraved armorial bookplate 'Earl of Caledon' with crown, elephant and mermaid on inside front-cover and blind stamp 'Heirlooms Caledon' with crown on title. James Alexander, 1st Earl of Caledon (1730-1802) made his career in the East India Company's civil service.