A complete set of Leeuwenhoek's letters in first and second issues. Letters 28-36, 38-47, 53-67 in second issue, all others are first. An absolutely complete set of Leeuwenhoek's letters, very rare, in the original Dutch. "Collected letters of the Dutch pioneer in microscopy, the first to see and describe bacteria, red blood corpuscles, spermatozoa" (Horblit 65). Contains Letters 28-146 and I-XLVI, which is all published. The first 27 letters were published in the Philosophical Transactions of the Royal Society and were not published separately. A complete set such as this is extremely uncommon. The letters in the Dutch language preceded the Latin versions and are thus from a collector's point of view far more desirable than the Latin edition. The first edition of Leeuwenhoek's letters is so rare that the Norman collection only had parts of it and Dobell had only seen one copy. In 1672 Leeuwenhoek began to make his own microscopes with extremely powerful lenses, with which he examined innumerable organic and inorganic structures. Regner de Graaf introduced him to the Royal Society in 1673, and from then on for half a century he wrote long letters to the Society in which he described a vast array of discoveries. He was the first to observe, inter alia, the red blood cells, and he saw the passage of blood from the arteries to the veins in the fin of a fish in 1688. This event was the final proof of Harvey's circulation theory. He first described, in about thirty letters, micro-organisms, including bacteria, protozoa, and rotifers. His discovery of unicellular life made him the father of Microbiology. At the suggestion of the medical student Johann Ham, Leeuwenhoek examined seminal fluid and observed spermatozoa, which he called 'little animals' (animalcula). He was convinced that man was preformed in them, and thus started a long-running debate with the Harveian school. He is one of the greatest figures in the history of microscopy, and is with Hooke the only seventeenth-century microscopist about whose technique anything is known. Leeuwenhoek wrote more than 350 letters to the Royal Society; these were abridged or summarized in English translation in the Philosophical Transactions. The original texts were published in Dutch and in Latin translation. The bibliographical references to the letters in our copy are as follows: Letters 28-31 (Dobell 8a); letters 32-33, 39 (Norman 1302); letters 34-36 (Dobell 8a); letter 37 (Dobell 2); letter 38 (Dobell 5); letter 40 (Dobell 3a); letters 41-43 (Dobell 17); letters 44-45 (Dobell 6a); letters 46-47 (Dobell 7a); letters 48-52 (Dobell 9); letters 53-60 (Dobell 10a); letters 61-67 ((Dobell 12a); letters 68-75 (Dobell 13); letters 76-83 (Dobell 14); letters 84-96 (Dobell 15); letters 97-107 (Dobell 16); letters 108-146 (Dobell 18); Send Brieven I-XLVI (Dobell 19). The outer margin of a very few leaves a bit frayed or browned, else a good copy. Provenance: Signature of Adriaan Jan van den Noort 1831 on free endpaper. Horblit 65; PMM 166 (citing the later Latin edition because of availability); Dobell, Antony van Leeuwenhoek and his 'Little Animals', pp. 392-394; Norman, The Haskell Norman library of science & medicine, pp. 479-482. 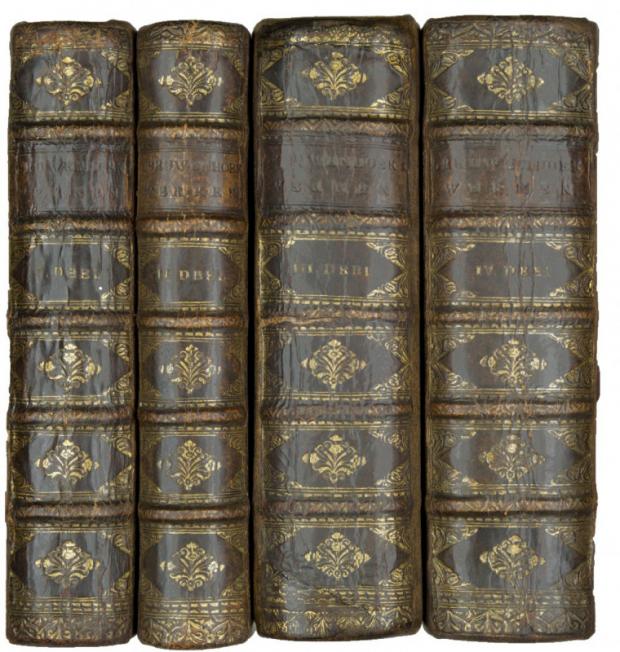