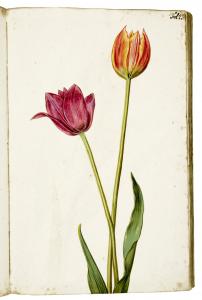 Eur 30,000 / USD 33,000
The price shown on each item does not include V.A.T (Value Added Tax). As a result of the recent EU legislation we are required to charge our EU customers the percentage of V.A.T. charged by the customer’s country of residence, unless they possess a V.A.T. registration number. Postage Additional.

This is a very attractive and interesting early botanical album, displaying exotics, perennials and garden flowers in full bloom, when the majority of published works were still concentrating on herbs. The manuscript is numbered 1 to 117, one leaf 48 is not present and 111 is numbered twice, there is one extra watercolour on the verso of leaf 64.
Seven leaves have representations of tulips (fol. 40-44, 86, 94), at least six others show American plants, including Ficus indica major and Yucca gloriosa, 8 leaves show beautiful carnations, 3 crocusses, plate 21 Corona Imperialis/ Käyserkron ( Fritillaria imperialis) is particularly attractive. The nomenclature of the plants is mostly in Latin and occasionally in German. Many of the plants depicted in the present florilegium also figure in the famous Hans Simon Holtzbecker florilegium for the major Barthold Moller of Hamburg, albeit in a very different way. Both florilegia were painted at the same period. A list of the plants depicted in this interesting manuscript can be sent on request. Occasional offsetting from some of the drawings onto the next page.
The paper is watermarked 'Z' or 'Zittaw' (thus obviously Zittau) suggesting the origin of the manuscript in the region of Saxony. Ex libris Henrich Götting from Flensberg (1786-1863) on inside frontcover.