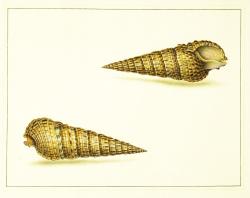 [Vols. I and II:] Figures of non-descript Shells collected in the different Voyages to the South Seas since the year 1764 ... [Vols. III and IV:] The Universal Conchologist, exhibiting the Figure of every known Shell, accurately drawn and painted after Nature: with a new systematic arrangement by the Author...

London, sold at his house no. 16 Great Marlborough Street, [1784-] 1789 [-1812]. 4 volumes. 4to (335 x 273mm), vol. I with engraved frontispiece of a shell, engraved title, engraved dedication to the King, two engraved plates of medals, pp. 27 [1, blank] letterpress text in English and French, engraved 'Explanatory Table', listing the shells and their sources, the three further volumes with engraved title and 'Explanatory Table' for each volume, with a total of 160 hand-coloured aquatint and watercolour plates (not counting the frontispiece) containing 355 figures, mostly depicting two views of a shell within a quadruple-ruled border; a few faint marginal waterstains on a few leaves, some very occasional marginal spotting, generally a very fresh, attractive copy, bound in contemporary full red straight-grained morocco, panelled in blind with interlocking panels on sides, spines tooled in blind, gilt ornaments on the turn-ins, gilt edges, with the bookbinder Welcher's label on free front endleaves.

A rare complete set of 'The Universal Conchologist', in the large-format 'deluxe' issue

The engraved plate of medals honours noble patrons of the work (the Emperor of Germany, the King of Naples, the Pope). The first is dated 1788. and the second 1792.