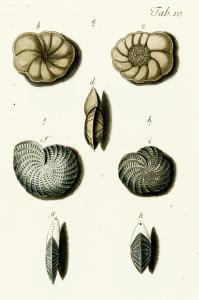 Eur 3,800 / USD 4,200
The price shown on each item does not include V.A.T (Value Added Tax). As a result of the recent EU legislation we are required to charge our EU customers the percentage of V.A.T. charged by the customer’s country of residence, unless they possess a V.A.T. registration number. Postage Additional.

rare and early work on Foraminifera

Second edition of this very rare and early work on Foraminifera, the first edition of which was published 1798. It is especially valuable since Montfort designated in 1808 a large number of forms of Fichtel and Moll as the genotypes of many genera. These species were again discussed by Parker and Jones in 1860. A number of years ago the original collection of Fichtel and Moll, which was the basis of this book, was by chance rediscovered in the Museum of Natural History in Vienna. It may be stated that the authors gave, for that time, very accurate descriptions and illustrations of the treated species.
"The publication of Fichtel & Moll (1798) on 'Testacea microscopica' has been of large influence on the investigation of the protozoan group foraminifera... Description and figures of these small foraminifera are of high standard. Therefore it is believed, that Fichtel & Moll have used the most modern optical instruments, invented in the second half of the 18th century. Connected with the search for the authentity of the collection the biography of the authors became of interest. Johann Paul Carl von Moll, born 1735 in Oettingen (Bavaria) was involved later on in the work of the Naturalien Cabinet in Vienna, the forerunner of the Natural History Museum. He died in Vienna, 1812. His co-author Leopold von Fichtel, son of an enthusiastic naturalist Johann Ehrenreich von Fichtel, became famous for his collection of objects of nature... He was born 1770 in Hermannstadt (Sibiu, Rumania) and died in his young years 1810 in Vienna" (F. Rögl, L.v. Fichtel und J.P.C.v. Moll und ihre wissenschaftliche Bedeutung, Wien 1982). The plates are meticulously drawn and finely hand-coloured.