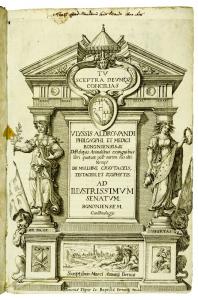 The first major work on shells

The first major work on shells. The first edition was published in 1606. Aldrovandi was a truly Renaissance universal mind, writing on many aspects of natural history. His oeuvre consists of 13 large folio volumes, of which only 4 appeared during his lifetime. "Although Aldrovandi is not identified with any revolutionary discoveries, his work as a teacher and as the author of volumes that constitute an irreplacable cultural patrimony earns him a place among the fathers of modern science. Perhaps most importantly he was among the first to attempt to free the natural sciences from the stifling influence of the authority of textbooks, for which he substituted, as far as possible, direct study and observation of the animal, vegetable, and mineral worlds" (DSB I, pp. 108-110). The work deals likewise with crustacea and zoophytes. A clean copy.