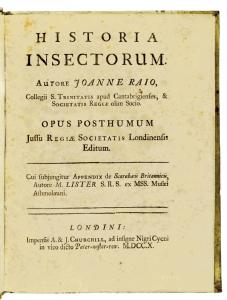 Eur 1,900 / USD 2,100
The price shown on each item does not include V.A.T (Value Added Tax). As a result of the recent EU legislation we are required to charge our EU customers the percentage of V.A.T. charged by the customer’s country of residence, unless they possess a V.A.T. registration number. Postage Additional.

First edition. "The culmination of Ray's zoological work was the study of invertebrates which resulted in his posthumous 'Historia Insectorum (1710)'. On this topic Ray was dealing with virtually virgin territory. The only previous substantial work on the subject was produced a century before by the English naturalist Thomas Moffet" (DSB XI, p. 317). 'On Ray's death in 1705, the 'Historia Insectorum' was an incomplete manuscript. It was published 'opus posthumum' by the Royal Society five years later, after some editing, together with an appendix on beetles by Martin Lister (1638-1712). It presented a great advance in knowledge, both in terms of the insects themselves, and in the way they were classified - there was to be nothing comparable for it for nearly a century' (M.A. Salmon. The Aurelian legacy p. 100). An attractively bound copy. Some serious browing at the beginning and the end of the book. A rare item which is always prone to foxing due to the quality of the paper.