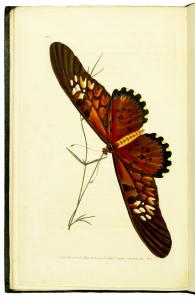 The Naturalist's Repository, or miscellany of exotic natural history exhibiting rare and beautiful specimens of foreign birds, insects, shells, quadrupeds, fishes and marine productions; more especially such new subjects as have not hitherto been figured, or correctly described; forming a compendium of the most interesting modern discoveries in zoology.

One of the most attractive, colourful natural history works of the period, describing many newly discovered exotic animals. The present copy is a title-edition of 1834, having the same plates and text as the first edition, with the only difference that a new title-page has been printed. The work was originally issued in monthly parts from 1823-7. The coloured plates are usually accompanied by one to three leaves of text. According to Buchannan 'Nature into Art', Donovan was particularly fond of using bright colours in his plates and the offered work is a very good example for this. 52 of the beautiful illustrations depict shells, 70 plates concern entomology and exotic butterflies figure extensively and 26 plates are devoted to birds. "It will be also seen from many of our pages that through the kindness of the late worthy president of the Royal Society, Sir Joseph Banks, the rich and truly scientific collection of that magnificent patron of sciences was ever open to us for the furtherance of our pursuits in Natural History; and of the object of the present work among others' (From the introduction). The work shows first depictions of butterflies and insects collected during the first Cook voyage such as plate 37 'Papilio Marica' of the second volume. Paper repair to title-pages, some traces of library stamps on verso of some plates not affecting the illustrations.