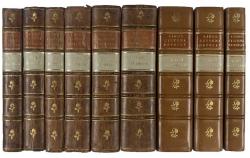 The original edition of the posthumous Gmelin edition of the 'Systema Naturae', adding new material, in particular with regards to the discoveries in the field of Zoology made during the last 20 years, and therefore one of the most sought after new editions. The 3 plates show minerals.
The edition is important as it describes numerous species from Cook's voyages. "... Johann Friedrich Gmelin who, making free use of the many non-Linnaean works of the day, revised Linnaeus's 'Systema Naturae', beginning in 1788. By introducing new and acceptable binominals he was able to obtain authorship of numerous species, and many New Zealand molluscs and fish collected on Cook's voyage bear his names...This explains why so many New Zealand birds discovered in those days have Gmelin's name as author: the Shining Cuckoo, the Tui, Morepok, South Island Kaka - the list is long" (Andrews, The Southern Ark pp. 55 & 61).