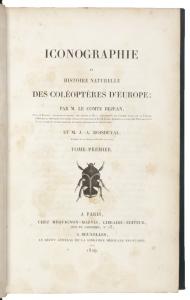 Eur 5,000 / USD 5,800
The price shown on each item does not include V.A.T (Value Added Tax). As a result of the recent EU legislation we are required to charge our EU customers the percentage of V.A.T. charged by the customer’s country of residence, unless they possess a V.A.T. registration number. Postage Additional.

A fine uniformly bound set of this beautifully illustrated French classic on European beetles. The first two volumes in their original issue of 1829-1830. The stock of the first 2 volumes was destroyed by fire and both volumes were reprinted in 1837. The last volume 5, which is mostly lacking was written by Ch. Aubé and must have been issued in a small number. P.F. Dejean was called 'the first great coleopterist'. Together with Boisduval, who was his private curator, he published the above work on European coleoptera. "The great name in coleopterology during the early nineteenth century was P.F.M.A. Dejean (1780-1845), with a career quite exceptional among entomologists; a general who rose to the title "pair de France" and served as Napoleon's first aide-de-champ in the battle of Waterloo. Dejean was an ardent collector and eventually in part by purchase, brought together the largest private insect collection of his time. He lost no opportunity to fetch rare specimens, which is amply evident from what was told about his somewhat unmilitary behaviour during raging war" (R.F. Smith a.o. History of Entomology pp. 125-6). Dejean added insects to his collection from the fields of Waterloo. His collection numbered 22,399 species in 1837. W. Junk in his 'Bibliographia Coleopterologica' Berlin 1912 item 789 offers a copy of this rare work at Reichsmark 100, which makes it one of the most expensive works in the catalogue. Some occasional light foxing.